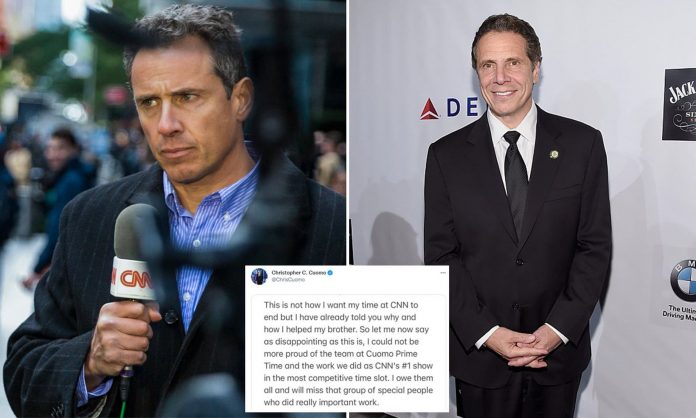 Embattled anchor Chris Cuomo responded to his termination from CNN over his ‘conduct with his brother’s defense’, saying he was disappointed in the network’s action but remained proud of his team, Your Content has learned.

Former CNN anchor Chris Cuomo released a statement Saturday following his termination from the network which was ‘effective immediately’.

The anchor was reportedly terminated over ‘conduct with his brother’s defense’.

He expressed regret for his part of the scandal – but still asserted that he was only helping his brother.

In an announcement released Saturday afternoon, the network revealed more information had come to light during its internal investigation into the anchor.

After amassing a trove of texts and transcripts pointing to a breach of network standards by the journalist, CNN notified him of his termination Saturday.

The announcement revealed that the network enlisted an outside law firm to help discern how he helped his brother deal with sexual misconduct allegations.

The veteran TV journalist was suspended indefinitely by the network on Tuesday.

An attorney says she shared sexual misconduct allegation against Cuomo with CNN on Wednesday, but the nature of the allegation isn’t clear,’according to The Daily Advent.