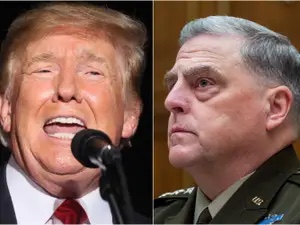 Former President Donald Trump blasted Gen. Mark Milley in front of a crowd at his Mar a Lago resort, condemning the country’s most senior military figure as a ‘f*****g idiot’ for the chaotic withdrawal from Afghanistan, Your Content has learned.

Former President Donald Trump spoke at an event at Mar-a-Lago in which called Gen. Mark Milley a ‘f***ing idiot’ for leaving US military gear in Afghanistan.

And he called journalists a ‘bunch of very dishonest, crooked b*****ds’.

Trump spoke for more than 15 minutes to a group from Turning Point Action, a conservative organization founded by activist Charlie Kirk.

He boasted about being responsible for the press’ approval ratings plummeting.

Trump also said the GOP would ‘do well in 2022 and in 2024’, but didn’t declare his own intentions to run for the White House,’according to The Hill.