University of New Hampshire student, 22, is found dead in woods 36 hours on from going missing after ‘first fight ever’ at frat party that saw him ejected from bash
U 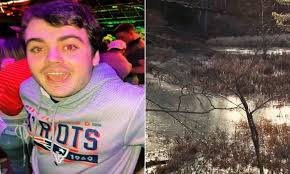 A 22 year-old student from the University of New Hampshire has been found dead n a wooded area 36 hours after going missing following a fight at a frat party his friends said was extremely out-of-character, Your Content has learned.

Lirosi located by a New England Search and Rescue K-9 team in a marshy area close to the campus.

Student had attended a frat party at which he got into a fight and was told to go.

He was walking back to his residence after 1am with the alarm raised at 3am.

The cause and manner of death will be determined after an autopsy although it is not thought to be suspicious.

‘Though this is not the outcome we had all hoped for, we are grateful that we were able to find Vincenzo and bring some closure to his family, ‘ police said,’according to Times News Network.