Thought you were going to talk tough, Joe? Biden gives Putin a WAVE after forgetting to turn on his mic during video call Threatens toughest sanctions yet against Russia if it invades Ukraine
T 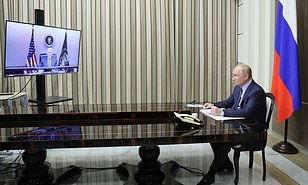 President Joe Biden was seen waving to Russian President Vladimir Putin and chuckling during what was supposed to be a tense video call on Tuesday morning, Your Content has learned.

Call started off with some technical difficulties when Biden apparently forgot to switch his microphone on.

American President was then seen waving to his Russian counterpart and chuckling at the technical issues.

Russian news agencies released video of the first few clips of the call.

Call is one of the biggest tests of Biden’s diplomatic skills to date as he tries to head off an invasion of Ukraine.

On Monday, leaders of US, Britain, France, Germany and Italy discussed how to retaliate if Putin invades.

Resolved to ‘impose significant and severe harm on the Russian economy’ if Putin launches military action.

Russia could be cut off from global financial systems, in an ‘Iranian-style’ isolation,’according to CNN.