‘We know the gun was in the school and he had access to it’: Michigan prosecutor refuses to rule out criminal charges for Oxford High School officials who failed to check Ethan Crumbley’s backpack and locker despite warning signs
& 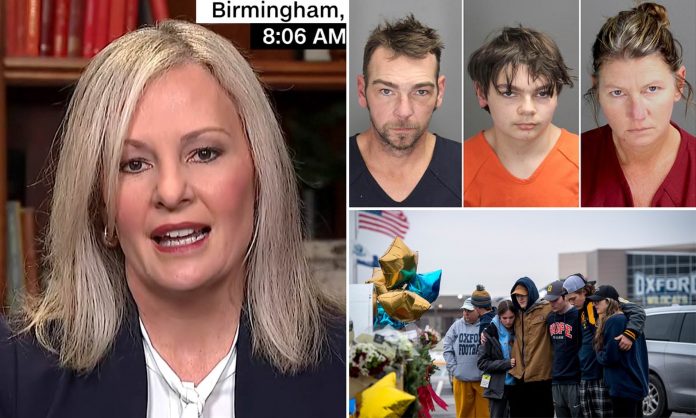 Oxford High School officials could face criminal charges and civil lawsuits for failing to search 15 year old Ethan Crumbley’s backpack and locker before the fatal shooting despite catching him searching for ammunition on his phone and for a disturbing drawing before the shooting, Your Content has learned.

The school failed to check his locker and backpack a chilling note, depicting a bullet and the words, ‘blood everywhere’ was found on the day of the shooting.

The day before, Ethan was also caught searching for ammunition on his phone.

School officials can now be charged or face civil lawsuits for their failure to do so.

McDonald said an investigation will determine whether they will be charged.

School officials had concerns about Crumbley, 15, before he allegedly shot up Oxford High School last Tuesday.

That morning a teacher reported him to school officials for disturbing pictures and statements he made.

He was reportedly watched by guidance counselors for over an hour as officials tried to get in contact with his parents, James and Jennifer.

When they replied, they said Ethan was not a harm to himself or anyone, and he was allowed to return to class.

They did not mention that they had bought Ethan a gun when they went Black Friday shopping, McDonald claims.

Ethan’s parents are now charged with four counts of involuntary manslaughter,’according to The New York Times.