Michigan high school shooter Ethan Crumbley’s parents ‘drained $3,000 from his bank account and made plans to move to Florida to sell horses after he was arrested’ Judge refuses to lower $500,000 bail
M 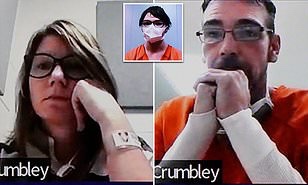 Michigan high school shooter Ethan Crumbley’s parents drained his bank account and made plans to move to Florida where they planned to sell horses immediately after he was arrested for killing four classmates, a court heard, Your Content has learned.

James and Jennifer Crumbley will remain held on a $500,000 cash bond on manslaughter charges connected to the Oxford High School shooting.

An Oakland County judge refused to lower bond because they are a flight risk.

Prosecutors say immediately after their son was arrested, the couple started making plans to move to Florida where they would sell horses.

The Crumbleys have pleaded not guilty to all four charges of involuntary manslaughter one for each Oxford High School student.

Ethan Crumbley, 15, is charged with killing four students at a Michigan high school on November 30, 2021.

On Friday, the teenager waived his right to a crucial probable cause hearing a decision that moves his case straight to trial,‘according to Courthouse News Service.