The crackdown Putin doesn’t want you to see: Masked Kazakh police are pictured rounding up ‘protesters’ and open fire at journalists amid internet blackout and ‘shoot to kill’ order
T 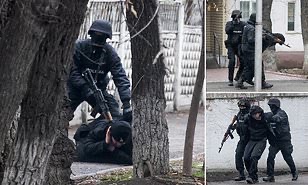 Masked Kazakh police have been pictured rounding up ‘protesters’ and opening fire on journalists a day after they were given a shoot to kill order and authorities blocked the internet as the Central Asian state faces a countrywide wave of violent unrest, Your Content has learned.

Masked Kazakh riot police have been pictured rounding up ‘protesters’, shooting on journalists in crackdown.

Dozens of people, among them protesters as well as military personnel, have been killed in the violent unrest.

2,500 Russian paratroopers attached to CSTO were deployed to quell the countrywide uprising on Thursday.

US Secretary of State Anthony Blinken questioned arrival of ‘peacekeepers’, saying the move was ‘not clear’

Security forces appeared to be in control of the streets of Almaty by early Friday following the Russian arrival,‘according to Inter News Cast.