Parents of late Jeopardy! champion Brayden Smith, 24, file lawsuit claiming he died due to medical malpractice after hospital removed his colon but failed to put him on anti clotting drugs afterwards
P 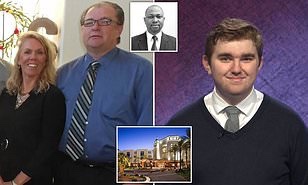 The parents of a five time Jeopardy! champion are suing for medical malpractice after their 24 year old son died in February following colorectal surgery, Your Content has learned.

Smith, who won $115,000 in the quiz, died after colorectal surgery in Nevada.

He was considered on social media to be Alex Trebek’s ‘last great champion’ having taped his episodes last October prior to Trebek’s death on November 8.

On Monday, Smith’s parents filed a medical malpractice suit against the hospital and the medical team who operated on the quiz champion.

They claimed that Smith was never given anticoagulants after the surgery, and died of pulmonary emboli, or blood clots in the lungs, nearly three weeks later,‘according to CBS8.