By Your Content Staff
Modified 1 hour ago
January 12, 2022
Featured 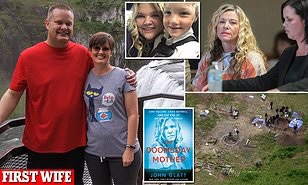 End-times cult leader Chad Daybell’s attempt to cover his tracks with a text message actually led to his arrest and that of his wife Lori Vallow on suspicion of murdering her two children, a new book, exclusively obtained, Your Content has learned.

A new book obtained reveals how Chad Daybell unwittingly blew his and wife Lori Vallow’s cover with a text message.

The Doomsday Mother: Lori Vallow, Chad Daybell and the End of an American Family, tells how Daybell raised suspicions with a text to his first wife Tammy.

Daybell, 53, told Tammy on September 9, 2019 that he had decided to burn some ‘lime debris’ in the couple’s backyard by their pet cemetery.

He said he had had ‘an interesting morning’ and that he had, ‘shot a huge raccoon and burned it.’ He signed off, ‘Fun Times!’

The FBI uncovered the text in May 2020 and the children’s bodies were discovered buried behind Daybell’s Idaho home the following month.

Tylee was found dismembered and burned, while JJ was bound, stuffed in trash bags and covered with planks of wood and dirt,‘according to The Daily Mail.