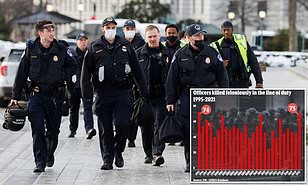 The FBI recorded a 26 year high for on-duty police officers intentionally killed across the United States last year, as overall crime and murder rates hit record highs, falling just one short of the all time grim mark of 74, Your Content has learned.

The FBI recorded a historic high of on-duty police officers intentionally killed while in the line of duty last year reporting 73 officers killed.

The number of accidental on duty police deaths increased as well with 56.

There was also a drastic increase in ‘unprovoked’ attacks on officers last year.

The FBI has opened an investigation into the spike in ‘unprovoked’ police killings.

Complications from COVID has remained the top cause of death for officers in the last two years; police unions have continued fighting vaccine mandates.