Biden’s woke Federal Reserve nominees: Economist married to a Democrat who wants to choke off oil and gas lending, Obama-era official who has written about the economics of lynching and professor who is expert on economics of poverty
B 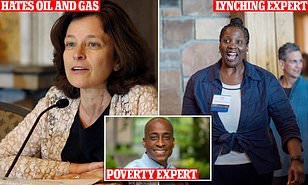 Joe Biden has nominated three people to the board of the Federal Reserve in what would usher in the most diverse group in the Fed’s history and the most woke, Your Content has learned.

Sarah Bloom Raskin, the wife of Democrat congressman Jamie Raskin, has been nominated to be in charge of policing the nation’s largest banks for the Fed.

The Duke University professor has previously served as a Fed governor and deputy Treasury secretary, and is known for her focus on climate change.

In September, Raskin said regulators must ‘incentivize a rapid, orderly, and just transition away from high-emission and biodiversity-destroying investments’

Lisa Cook, if appointed, would be the first black woman to serve on the Fed’s board.

Cook said she was inspired to become an economist while climbing the highest mountain in Africa, Mount Kilimanjaro, and went on to work in Rwanda.

She worked with U2 frontman Bono to lobby the White House to cancel developing world debt.

Her work at Michigan State has included investigating how segregation, lynchings, and race riots from 1870–1940 reduced the total number of patents.

The third nominee is Philip Jefferson, currently a professor at Swarthmore in Pennsylvania specializing in poverty reduction.

Washington DC-born, he said he wanted as a child to be a banker because he saw on television they were ‘well dressed,‘according to The Daily Mail.