Devoted husband sells his prized sneaker collection for $5,000 to fund IVF treatment for his wife who suffered EIGHT miscarriages during her five year struggle to conceive
D

By Your Content Staff
Modified 2 hours ago
January 14, 2022
Featured 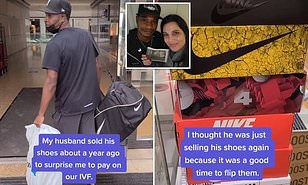 A husband sold his prized collection of high-end sneakers to fund IVF treatment for his wife – who spent five years trying to conceive, undergoing 11 surgeries along the way and suffering eight miscarriages, Your Content has learned.

Lauren and EJ Wynn, both 35, from Chesapeake, Ohio, spent years trying to have a child together, but they were faced with heartbreak after heartbreak.

They went through eight miscarriages and two failed intrauterine inseminations leaving Lauren ‘discouraged’ and ready to give up on becoming a mother.

Their last resort was in vitro fertilization, but they didn’t know how they would afford the expensive procedure which costs an average of $12,000 to $17,000.

But EJ decided to sell his sneaker collection to cover the costs, bringing his wife to tears over the sweet gesture and touching many people on the internet.

He brought in $4,800 from his first round of sneaker sales, money that he presented to his wife as a surprise.

The IVF worked and in August 2021, the couple announced that they were expecting a baby boy together,‘according to ABC News.