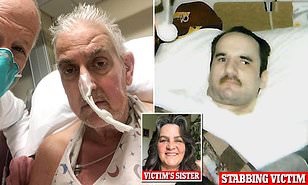 The dying handyman who became the first patient in the world to get a heart transplant from a genetically-modified pig stabbed a man he met in a bar seven times more than three decades ago, leaving him paralyzed and wheelchair bound, Your Content has learned.

Bennett attacked Shumaker after he caught his then-wife sitting in the man’s lap while they were talking and drinking.

Shumaker was left paralyzed and wheelchair bound until he died at age 40.

Bennett was convicted of battery and carrying a concealed weapon, and was sentenced to ten years in prison; He did not serve the entire sentences.

Shumaker’s sister, Leslie Downey, said she ‘wishes the heart had gone to a deserving recipient,‘according to The Washington Post.