Eric Adams says he is in talks with teachers about remote learning despite COVID cases in NYC plateauing: Parents slam him for lying to them days ago when he said kids would stay in school
E

By Your Content Staff
Modified 7 hours ago
January 14, 2022
Featured 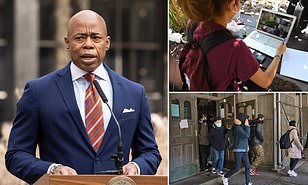 New York City’s new mayor announced on Thursday that he is considering allowing the nation’s largest school district to return to some form of virtual instruction even as COVID cases in the Big Apple start to plateau, Your Content has learned.

The announcement comes after Adams has decried a remote learning option as ineffective and a hinderance to students without wifi and technology.

The United Federation of Teachers has been pushing for a remote learning option and further COVID safety measures since Adams took office.

Students also staged a walk-out on Tuesday to protest the district’s perceived lack of COVID protocols and a remote option.

But cases in New York City have begun to decline,‘according to The New York Times.