Grandmother, 61, who married a man 37 YEARS her junior reveals the couple is now planning to have their first baby together (but her EIGHTH) via surrogacy after attempts to conceive naturally failed because of her age
G

By Your Content Staff
Modified 3 hours ago
January 14, 2022
Featured 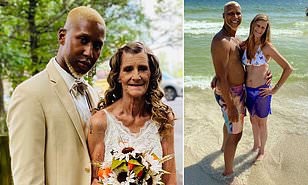 A 61 year old grandmother and her new husband, 24, have announced that they’re planning to have their first child together through surrogacy despite their 37 year age gap, Your Content has learned.

Quran McCain and Cheryl McGregor from Rome, Georgia, first met in 2012 while they were both working in the fast food chain Dairy Queen.

They reconnected in 2020 and started dating. They got married last year, and now, they are ready to expand their family.

The couple tried to get pregnant on their own but due to Cheryl’s age, they decided to turn to surrogacy or adoption.

Cheryl has seven children and 17 grandchildren already, but the couple said they ‘feel they deserve children of their own’

Since Cheryl is much older than Quran, they know he may have to raise their child alone somewhere down the line and are prepared for that.

The couple claims that their sex life is fantastic and they have great chemistry despite their nearly four decade age difference,‘according to The SUN.