Miami couple kidnapped and held a man hostage at gunpoint for three days, torturing and forcing him to drink bleach and rum before he finally escaped, police say
M 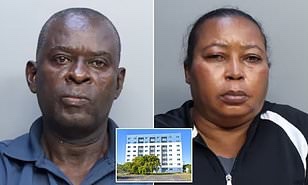 Police said a Miami couple kidnapped a man and held him hostage at gunpoint, torturing him for three days before he was able to escape, Your Content has learned.

On December 28, Marie Dorsainvil, 52, contacted an unidentified victim and asked him to give her a ride to her apartment and then for him to go up with her.

Police said the victim, who knew Dosainvil since February 2020, hesitated because they were both married to other people, but was convinced.

Once inside the victim sat on the couch, and was tied up by the arms and legs by Occius Dorsainvil, 56, when he entered the apartment with a gun.

The victim was chained up and held against his will at gunpoint as the duo demanded $50,000 in cash from and repeatedly threatened to shoot him.

Police said the suspects forced the man to rehearse and record a statement admitting to having and affair with the 52 year old.

The victim told the couple that he didn’t have $50,000 to give them, but he would sign his vehicle title over to them on December 30 if they set him free.

Occius made the victim drink a bottle filled with bleach and Haitian rum, telling him ‘Do not throw it up or spit it out or I will shoot you. Chug it all,’

The victim then pretended to be drunk and laid back in the front passenger seat and when he opened his eyes twenty minutes later, the suspect was gone.

That was when the victim asked for help from pedestrians for called police,‘according to FOX News.