By Your Content Staff
Modified 1 hour ago
January 14, 2022
Featured 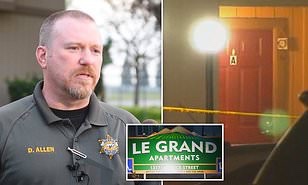 Three children under the age of eight were found dead inside a small-town California apartment and a woman with ‘self-inflicted’ injuries was flown to the hospital, police report, Your Content has learned.

Three children under eight were killed instead an apartment in Le Grand, California roughly 50 miles outside of Fresno.

A woman was also found inside the apartment and was said to have ‘self-inflected’ injuries and was taken to the hospital in a ‘life-threatening’ condition.

The relationship between the woman and the three children has not been disclosed by police, but neighbors said a family lived in the apartment.

The Mercer County Sheriff’s Department was called to the residence for a welfare call after several calls reported a man screaming: ‘My kids were killed’

The police are currently investigating the incident and the case is being viewed as a potential murder suicide,‘according to California News Times.