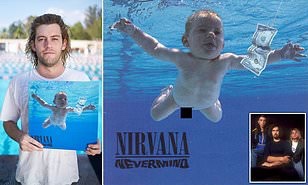 The nude baby on Nirvana’s Nevermind album has filed a new $1.5million lawsuit claiming the iconic image is child pornography after a judge threw out his original case, Your Content has learned.

Spencer Elden, the Nirvana baby, has filed a new $1.5million lawsuit over cover.

He is seeking at least $150,000 from 10 defendants for alleged child exploitation.

The band’s lawyers argued Elden ‘spent three decades profiting’ from the album,‘according to The Daily Beast.