By Your Content Staff
Modified 2 hours ago
January 14, 2022
Featured 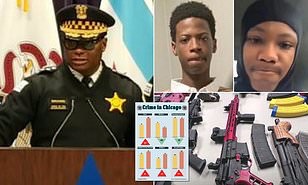 A pair of Chicago teens were shot dead hours apart from one another, as the Windy City continues to suffer rampant crime, Your Content has learned.

A pair of 14-year-old Chicago teens were shot and killed in separate incidents on Wednesday in the midst of the city’s rising crime rate.

The first shooting involved Javion Ivy who had been standing on the sidewalk at the 2200 block of West Adams Street before he was shot in the chest.

A few hours later, James Sweezer was also shot by someone from a passing vehicle while he was walking with a friend on the 1400 block of West 73rd Street.

Both teenagers were transported to local hospitals where they were pronounced dead.

This incident comes after Chicago saw a violent year in 2021 with a total of 3,561 shootings recorded,‘according to The Daily Mail.