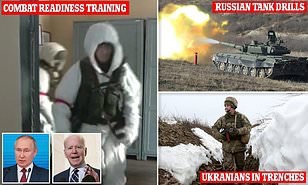 The US has intelligence that Russia is planning a ‘false-flag’ operation on its own forces in eastern Ukraine to create a pretext for invasion, Your Content has learned.

US official tells CNN that Russia is planning a ‘false flag’ attack to justify invasion of Ukraine.

It would mimic the Russian playbook used in 2014 when it annexed the Crimean peninsula.

Kiev has been on alert since Moscow moved 100,000 troops, missiles and heavy weapons close to its border.

Meanwhile, Ukrainian websites were hacked with the message ‘be afraid and expect the worst’

And Russian foreign minister Sergey Lavrov said Russia had ‘run out of patience’ with the West,‘according to Times News Network.