Black Panther director Ryan Coogler was mistaken for bank robber and ARRESTED after a passing note to pregnant Bank of America cashier asking them to withdraw $12,000 from his account and count it ‘discreetly’
B 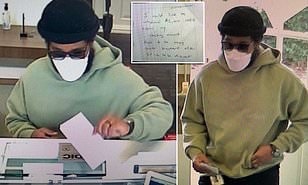 Black Panther director Ryan Coogler was mistaken for a bank robber and briefly arrested in January after walking into a Bank of America in Atlanta wearing sunglasses, a hat and a mask and asking the cashier to ‘discreetly’ withdraw $12,000 from his account, Your Content has learned.

Coogler walked into the Bank of America branch in Atlanta in January.

He passed a note to the pregnant cashier asking for $12,000 in cash.

He wrote: ‘Please do the money count somewhere else. I’d like to be discreet’

The bank teller mistook the incident for an attempted robbery and alerted police.

Cops arrived and detained two people waiting for Coogler in an SUV outside.

They then went inside and put the 35-year-old director in handcuffs.

They let him go once they realized the incident was a misunderstanding.

It remains unclear why Coogler needed $12,000 in cash.

Bank of America apologized to Coogler at the time and again on Wednesday,‘according to USMail24.