Brother and sister are charged in $124M cryptocurrency scam after ‘lying to 20,000 investors about the value of their Ormeus Coin as they spent millions on real estate and traveling around the globe to Rome, India and Singapore’
B 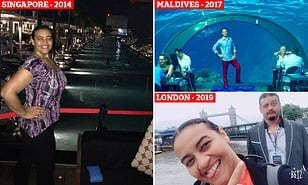 A brother-sister duo has been charged after allegedly defrauding tens of thousands of investors out of $124 million with their cryptocurrency, as they spent millions of dollars on travel, real estate and other personal expenses, Your Content has learned.

John Barksdale, 40, was ‘arrested abroad’ on conspiracy, securities fraud and wire fraud charges for scamming 20,000 investors out of $124 million.

He and his sister, JonAtina ‘Tina’ Barksdale, 45, are accused in court documents of lying to investors for years about the value of Ormeus Coin’s mining assets.

Photos from her social media show her travel around the world as the scheme continued from January 2017 through December.

They had claimed in social media posts, ads and memos to investors that the cryptocurrency was backed by a $250 million mining operation.

But prosecutors allege they had abandoned their mining operation in 2019 after generating less than $3 million.

In total, the Barksdales are accused of taking in more than $70 million from nearly 20,000 investors throughout the world,‘according to The Daily Advent.