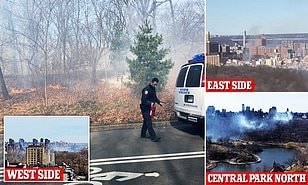 Ten small fires were set alight across New York City’s Central Park on Tuesday afternoon in the northeast section, close to Harlem, Your Content has learned.

Firefighters battled a number of brush fires in Central Park on Tuesday.

The FDNY believed the fires were set by an arsonist.

Reports of a fire at Central Park and West 110th Street came in about 1:20pm.

FDNY say they found up to 10 fires burning in the area – all were put out.

Officials say one of the fires was a little bigger than the others.

Pictures on social media showed flames along the ground burning fallen leaves,‘according to The Daily Advent.