iPhone users will FINALLY be able to unlock their smartphone while wearing a mask from next week, as Apple confirms the rollout of its iOS 15.4 update – which also includes a ‘gender-neutral’ voice for Siri and a pregnant MAN emoji
i 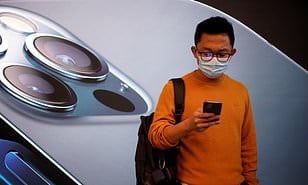 Apple has quietly confirmed that the much-anticipated rollout of its iOS 15.4 update is coming sometime next week, Your Content has learned.

iOS 15.4 has been going through beta testing prior to being fully available.

The firm is also adding a fifth voice for its American Siri in the iOS 15.4 update.

New Apple emoji, revealed at the end of January, are also coming in the update,‘according to The Daily Advent