Three New Jersey women are arrested after 13-year-old girl is found wearing a canine SHOCK COLLAR: Child said she has been forced to wear it since fourth grade as a form of punishment
T 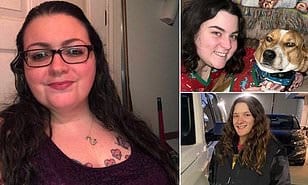 Three New Jersey women allegedly punished a 13-year-old girl by forcing her to wear an electric shock dog collar to discipline the child, beginning when she was nine years old, according to arrest warrants filed by the Camden County Prosecutor’s Office, Your Content has learned.

Kelly, 43; Rachel, 20, and Rebecca Mennig, 18, were arrested and charged with aggravated assault, child abuse and neglect.

The 13-year-old girl was found wearing a shock collar and was placed in foster care.

The women also allegedly starved her of food and deprived her of adequate clothing.

Police could see marks on the girl’s neck left by he collar.

The young teen fled to a neighbor’s house and gave the woman her collar, which was still vibrating.

The women also allegedly forced the girl to shoplift for them,‘according to The New York Post.