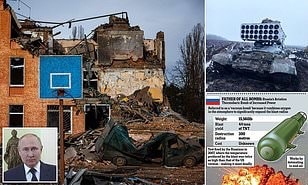 Russia has admitted to using a thermobaric ‘vacuum bomb’ in Ukraine, confirming widespread reports that the devastating weapons had been deployed, Your Content has learned.

Britain’s Ministry of Defense and Ukrainian newspaper Ukrayinska Pravda both reported that Russia had confirmed using a thermobaric bomb.

The Soviet-era weapon launches rockets from atop a tank body; the rockets suck in surrounding oxygen, creating higher temperatures and extreme explosions.

The weapons are not illegal but under rules of engagement cannot be used against military targets if their launch could also harm civilians.

A Russian artilleryman, Sergeant Sergei Gubarev, told Russian state TV he had used the weapon on March 4 in the Chernihiv region.

The day before the thermobaric bomb, 47 people died queuing for bread,‘according to The Daily Advent.