Transsexual, 83, serial killer on lifetime parole for murdering two people is arrested over killing of NYC woman whose dismembered body was found scattered around Brooklyn
T 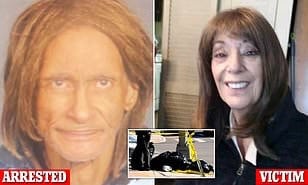 An 83-year-transsexual on lifetime parole for killing two women – one in 1963 and another reportedly shortly after she got out prison in 1984 has been charged in connection with the killing of a 68-year-old woman whose body was found dismembered in a Brooklyn neighborhood, Your Content has learned.

Harvey Marcelin, 83, who killed two women in 1963 and 1983, was arrested in connection to the murder of a 68-year-old woman in Brooklyn last week.

Marcelin was charged with concealing a body believed to belong to Susan Leyden, an acquaintance who was last seen at Marcelin’s apartment.

A search of Marcelin’s home turned up a human head days after a headless torso and leg turned up in the streets near the Cypress Hills apartment.

Marcelin had served 20 years in prison for killing a girlfriend in 1963 and killed another girlfriend after being out for only a year.

During a parole hearing, Marcelin said she had ‘a problem with women,‘according to Daily News.