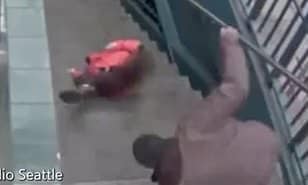 A homeless career criminal has been arrested and charged with brutally assaulting a nurse after he was caught on video repeatedly throwing the victim down the stairs at a Seattle light rail station in an unprovoked attack, Your Content has learned.

Police say Jay was caught on video repeatedly throwing victim down the stairs and kicking her.

Nurse suffered a broken clavicle and three broken ribs, which required her to undergo surgery.

Jay is also being investigated for a stabbing that took place shortly after assault on nurse.

Jay has criminal records in Washington and California that list 22 convictions, including on charges of burglary, theft and domestic assault,‘according to The Daily Mail.