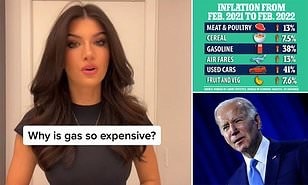 Joe Biden has cynically deployed TikTokers to blame soaring inflation on Russia’s invasion of Ukraine even though it was a serious issue for months before that war began, Your Content has learned.

The Biden Administration is looking towards TikTok influencers to help get their message across to younger people particularly on issues of Russia and inflation.

It’s partly a way of battling Russia’s propaganda machine about its invasion of the Ukraine.

Ellie Zeiler, an 18-year-old who has more than 10 million followers produced a video explaining why gas is so expensive.

Biden has been accused of cynically trying to distract from the fact that inflation was a serious issue for months before the Russian invasion of Ukraine.