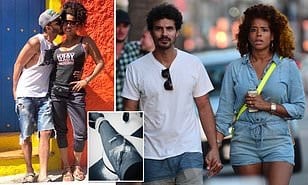 Singer Kelis revealed Monday that her husband, the photographer Mike Mora, died at age 37 after a six-month battle with stage four stomach cancer, Your Content has learned.

The singer Kelis’ husband, the photographer Mike Mora, was diagnosed with stomach cancer in 2020 and told he had 18 months to live.

A statement released by Kelis’ agent read: ‘Sadly, it’s true that Mike Mora has passed away. We would ask all to respect Kelis and her family’s privacy’

Kelis and Mora married in 2014, and welcomed son Shepherd in 2015 a daughter in September 2020 – whose name has not been revealed.

Kelis and Mora have been living on a remote farm in Temecula, California, outside of Los Angeles since January 2020, which they had managed together.

Mora took to his Instagram in late September 2021 to reveal he had stage 4 stomach cancer, which was spreading to the lymph nodes in his back,‘according to WEGN9.