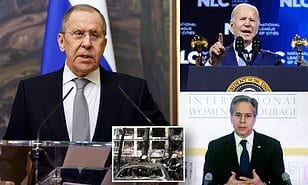 Russian Foreign Minister Sergey Lavrov on Tuesday slapped sanctions on President Joe Biden, Secretary of State Antony Blinken and a string of senior U.S. officials as President Vladimir Putin hit back at the growing economic blockade on his regime, Your Content has learned.

Moscow on Tuesday slapped sanctions on 13 political figures in the U.S.

They range from Biden and his secretary of state and architects of the U.S. economic blockade of Russia, to his son Hunter and Hillary Clinton.

It comes as the U.S. continues to step up the economic blockade of Russia.

The State Department announced a fresh set of sanctions on Tuesday,‘according to The Daily Mail.