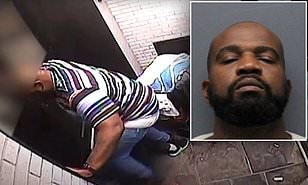 A black man who was charged with attempted murder as a hate crime after he was caught on video punching a 67-year-old Asian woman more than 125 times lived in the same building as the victim and has a lengthy rap sheet of 14 prior arrests – including seven felonies and three violent crimes, Your Content has learned.

Tammel Esco, 42, was also charged with assault and attempted murder as a hate crime for the Friday evening beating of an Asian woman, 67.

He allegedly yelled a racial slur at the victim before attacking her from behind as she tried to unlock the front door to her apartment.

He struck her once and knocked her down, punching her over 100 times more.

The victim is in stable condition but suffered facial bone fractures and bleeding from the brain.

The incident happened in the New York City suburb of Yonkers; New York has seen a spike in crime and anti-Asian hate crimes through 2020 and 2021.

Esco has had 14 prior arrests and seven felonies – including three violent crimes – and has had several stints in jail.

He spent 42 months in jail after stabbing someone in 2010 and even shoved someone through a glass wall in February 2021.

Residents of the building are now saying that they feel ‘unsafe’ and that residence houses many with criminal and mental health histories.

This isn’t the first time a tenant has been arrested there, with one having a squad arrest warrant in 2015 and another starting a fire on the seventh floor.

Tenants said there are ‘never-ending problems’ in the building and that homelessness, drug usage, and drug dealing are commonplace there,‘according to The New York Times.