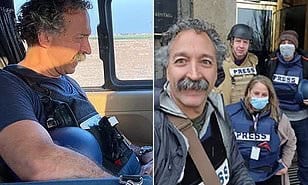 A Fox News cameraman was killed in Ukraine on Monday, when the vehicle he was traveling in with correspondent Benjamin Hall was struck by incoming fire, the network confirmed Tuesday, Your Content has learned.

Zakrzewski was based in London, but on assignment in Ukraine since February.

The vehicle he was traveling in was struck by incoming fire near Kyiv.

Zakrzewski was with reporter Benjamin Hall, 39, who was injured in the attack.

The network extended condolences to his wife, Michelle, and his family.

Hall remains hospitalized from the attack, but no details were released,‘according to The Daily Mail.