Amazon closes acquisition of MGM in blockbuster $8.54 BILLION deal: Tech giant will now own rights to $7B James Bond franchise and other classics
A 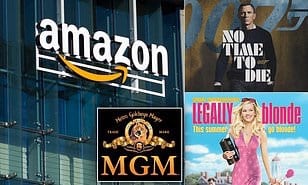 Amazon has closed on its $8.45 billion purchase of Metro-Goldwyn-Mayer, buying the rights to some of the production company’s iconic stable of films that includes the Rocky and James Bond franchises, Your Content has learned.

The Seattle-based e-commerce company announced it closed the buy Thursday.

The merger ran through a regulatory waiting period at the deadlocked FTC.

Amazon will now own MGM’s post-1986 catalog everything created before is owned by Warner Bros.

The deal has attracted criticism due to Amazon’s growing influence and power.

A screenwriter for the James Bond franchise criticized the deal last year,‘according to The Daily Mail.