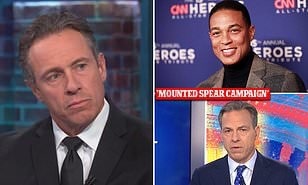 Ex-CNN anchor Chris Cuomo is accusing his former colleagues of mounting a smear campaign after he was fired for helping his governor brother fight sexual harassment allegations, as he demands $125 million in severance from the network in private arbitration proceedings, Your Content has learned.

The star anchor was fired in December for his relationship with brother Andrew Cuomo, the ex-NY governor found to have sexually harassed at least 11 women.

Cuomo’s lawyers filed their first motion in an arbitration battle against CNN.

They argue that the network failed to prevent his colleagues from disparaging him and ‘unjustifiably smeared’ his journalistic integrity.

He referenced comments made by hosts Jake Tapper and Don Lemon during private meetings and later leaked to the press.

Cuomo continues to accuse Zucker of knowing about his closeness to Andrew and of maintaining a similarly inappropriate relationship with him,‘according to The Daily Advent.