Disgusting moment white student at a private Louisiana Catholic school throws cotton at a black student and whips him with a belt: Teenager, 15, is charged with a hate crime
D 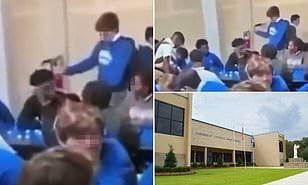 Footage captured the disgusting moment a white teenager at a private Catholic high school in Louisiana threw cotton balls at a black student before whipping him with a belt part of an apparent racist bullying incident, Your Content has learned.

A white teenager was arrested after he was caught on video throwing cotton at a black student and whipping him with a belt, part of an alleged bullying incident.

The video, filmed last Wednesday, has circulated online and sparked outrage from the local community and beyond.

The white student, identified only as a 15-year-old freshman, has since been charged with simple battery and committing a hate crime.

Vandebilt Catholic High School is 91.3% white and only 2.9% black or African American, with an overall minority enrollment of 8.7%,‘according to The Daily Advent.