Group of NYC dirt bikers drag driver, 64, and his adult son out of their car and batter them after they collided with one of the bikes who blew through a red light
G 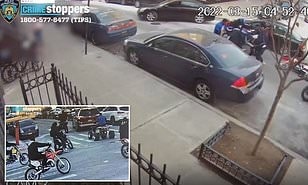 Terrifying security footage released by New York City Police Department Wednesday shows the moment a gang of dirt bikers beat down a 64-year-old motorist and his son in West Harlem, Your Content has learned.

Surveillance footage released by the NYPD Wednesday shows a gang of dirt bikers beating down a 64-year-old motorist and his son in West Harlem Tuesday.

Police say the attack occurred after the man accidentally hit one of the bikers at a Harlem intersection after the group had run a red light.

The clip, captured at West 127th Street near St. Nicholas Terrace, shows the crew of at least four bikers ripping the driver from the car, throwing him to the street.

The men proceed to kick and pummel the man, whose identity is currently being withheld by police, along with his also unidentified adult son, 36.

The suspects, who fled the scene with cash, credit cards, and a cellphone, are still at large,‘according to The Daily Mail.