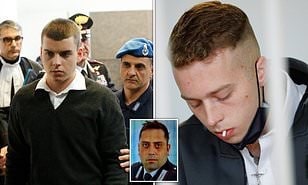 An Italian appeals court on Thursday reduced the sentences of two young American men serving life terms over the multiple stabbing death of a Carabinieri police officer while they were on vacation in Rome in 2019, Your Content has learned.

The Carabinieri police officer was stabbed when he confronted cocaine dealers.

The two Americans said they thought the plainclothes officers were thugs retaliating for the botched drug deal, claiming self-defense.

The stabber hid the knife after cleaning off the blood following the Rome attack.

An Italian appeals court commuted the sentence to 24 and 22 years on Thursday,‘according to The Toronto SUN.