Six USW golf team members and their coach who were killed when their van collided with Ford F-150: Head-on smash also killed the pick-up driver and passenger, 13
S 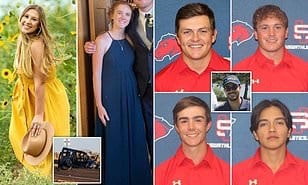 Eight of the nine people killed in a fiery Texas crash between their van and a wrong-way Ford F150 driver have been named by officials investigating the tragedy , Your Content has learned.

Laci Stone, a freshman at University of the Southwest, was identified by her mother as one of the fatalities.

Henrich Siemens, 38, of Seminole, who was driving the truck and an unidentified 13-year-old boy were also killed.

Two students survived and were airlifted to a hospital.