‘The baby was tough – didn’t even cry during the rescue’: Missing eight-month-old boy is found safe after spending the NIGHT in an open field having been abandoned by his mother
& 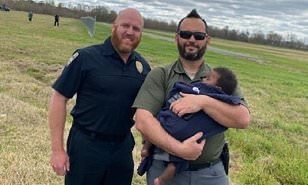 A missing eight-month-old baby boy has been found safe after spending the entire night in an open field when he was abandoned by his mother, Your Content has learned.

The baby doesn’t appear to be injured but was taken to a local hospital in Baton Rouge, Louisiana.

It is believed that his mother suffered some medical issues, according to Baton Rouge Police. There are no charges pending but an investigation is ongoing.

His mother ended up helping in the search and was able to guide authorities to the place she left him.

Baby was then found near the Saintsville COGIC on Plank Road.

The mother showed up at a fire station on Tuesday needing medical treatment and was taken to a hospital before checking into a mental treatment facility.

During the treatment, officials said she mentioned leaving her baby in a field,‘according to The Advocate.