The Vladimir Putin show: Strongman holds huge pro-war rally in front of thousands of ‘Z’ flag-waving Russians as he hails Ukraine ‘special operation’… before his speech is mysteriously cut off by ‘technical glitch’
T 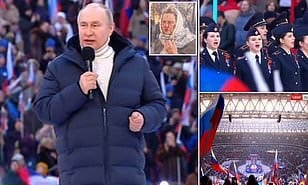 Vladimir Putin has today given a tub-thumping speech to tens of thousands of banner-waving Russians in an attempt to drum up support for his stalled invasion of Ukraine, as he peddled debunked claims about why the war started and shilled a false narrative of Russia’s battlefield ‘success’, Your Content has learned.

Vladimir Putin gathered tens of thousands of Russians at a rally in Moscow to drum up support for Ukraine war.

He gave a tub-thumping speech in which he peddled falsehoods about ‘Nazis’ in Ukraine, ‘genocide’ in the Donbass, and shilled a misleading narrative about Russia’s battlefield success.

As he spoke, Russian shells fell on Ukrainian civilians in an attempt to bomb the country into submission.

Towards the end of Putin’s speech the television cameras cut, suggesting he was not being broadcast live,‘according to The Daily Mail.