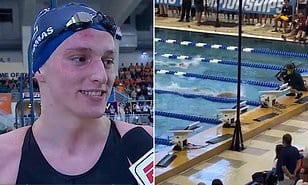 Lia Thomas has become the first transgender athlete to win a National Collegiate Athletic Association swimming championship – with her controversial victory attracting a mixed reception, Your Content has learned.

The transgender swimmer won her 500 yard freestyle, representing the University of Pennsylvania, in 4 minutes 33:24 seconds.

Her victory was greeted with a notable lack of cheers in the stands, amid the controversy: she competed in men’s competition until 2019.

On the podium, Thomas was given the medal amid boos and some cheers: by contrast, the second placed competitor was given a huge cheer at her crowning.

Thomas told ESPN after the race that she tried to drown out the controversy and focus on her swimming,‘according to The Daily Advent.