Unemployed man, 23, is sentenced to life in prison for killing and dismembering his parents after they discovered he was lying about being a police scuba diver and working for SpaceX
U 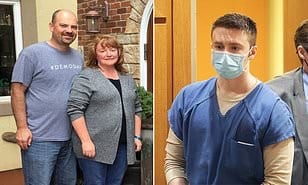 A Wisconsin man who was convicted of killing and dismembering his parents after they discovered his web of lies, including that he was police scuba diver and working for SpaceX, was sentenced Thursday to life in prison without parole, Your Content has learned.

Chandler Halderson, 24, of Windsor, was convicted in January of first-degree homicide, mutilating and hiding a corpse in the July deaths of his parents.

He was sentenced Thursday to life without parole, with a judge saying his obligation to protect the public required the stiffest possible sentence.

Investigators said Halderson killed his parents after his father discovered he had been lying about attending a technical college.

The unemployed Halderson also told his parents a series of lies about where he worked, claiming to have been hired at SpaceX and a police scuba team.

After dismembering his parents bodies, he tried to burn their bodies in the fireplace before dumping them along the Wisconsin River and at a rural property,‘according to The Daily Mail.