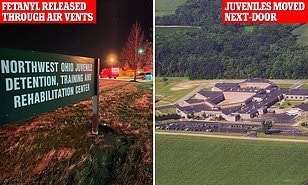 At least seven people at a juvenile detention and rehabilitation center in Ohio were hospitalized Sunday after fentanyl was released through air vents, officials said, Your Content has learned.

Three correction officers and four juveniles at the Northwest Ohio Juvenile Detention Training and Rehabilitation Center were taken to the hospital.

The Williams County Sheriff’s Office and the fire department responded to the incident around 8.30pm on Sunday after reports that detainees had collapsed.

Chief deputy Jeff Lehman said that everyone is stable and expected to recover. Responders found that fentanyl had been released on the air ventilation system,‘according to WWNYTV.