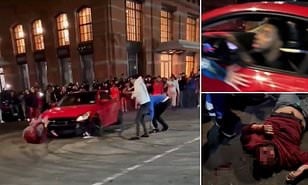 Horrifying footage shows the moment a man’s skull was fractured by a damaged sports car as he filmed it doing donuts during an illegal street race in Manhattan Saturday, Your Content has learned.

Wild video shows how a man was left in critical condition after he was run over by a souped-up sports car as it spun donuts in New York City over the weekend.

Around midnight on Saturday, the victim, 23, was filming the driver’s dangerous stunts at the intersection of Vandam and Greenwich Streets in Hudson Square.

Police described the car as being branded with the words ‘Tyler Spec’ in yellow font.

Meanwhile, the driver, who was described by authorities as a light-skinned man, sped off and fled the scene.

The victim was taken in critical condition to Bellevue Hospital, where he remained as of Sunday night,‘according to The Daily Mail.