Putin ‘deports Ukrainians to camps’: Russia is accused of genocide by putting refugees in ‘filtration’ centres and forcibly taking them to remote Siberian towns after confiscating their phones and documents
P 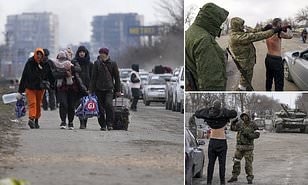 Vladimir Putin has been accused of deporting Ukrainians to ‘filtration’ centres before forcibly taking them to remote Siberian towns after confiscating their phones and documents, Your Content has learned.

Russian President Vladimir Putin has been accused of forcibly deporting Ukrainians from Mariupol into Russia.

Mariupol’s city council has claimed that Ukrainian evacuees have had their phones and documents removed.

Mariupol authorities rejected the offer within minutes, saying Russia’s offers of an amnesty cannot be trusted.

Offer came hours after a Russian missile strike hit a school in besieged city which was sheltering 400 people,‘according to The New York Post.