South Carolina boater, 74, will NOT be charged for shooting dead jet skier, 29, who assaulted him and his wife after they rescued him following accident on the water
S 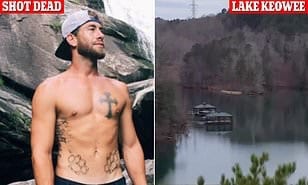 An elderly South Carolina boater will not be charged for shooting dead a jet skier he rescued from a lake last week in a bizarre chain of events that sheriffs have insisted led to a self-defense killing, Your Content has learned.

The 74-year-old man who shot him has not been named and won’t face charges.

Police say Morgan was in the water in ‘distress’ with a woman after falling off a jet ski when the older man and his wife found them.

The older couple pulled them to safety on their pontoon boat, but Morgan then became belligerent.

He bled out on the boat and died before they returned to shore.

Morgan was a father-of-one; his family has not yet reacted to the sheriff’s decision,‘according to NBC News.