NYC’s elite are in a tizzy after Justice Department ‘inadvertently’ publishes list of 121 ‘clients’ – including lawyers, businessmen, and socialites – who solicited Sarah Lawrence ‘sex cult victim’ who was forced into prostitution
N 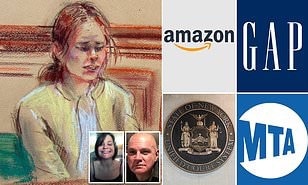 New York’s business elite was left shaking in its boots Tuesday after a list of alleged clients of the student prostitute in the Sarah Lawrence ‘sex cult’ case was inadvertently published online, Your Content has learned.

The US Attorney’s Office on Tuesday accidentally published a list of alleged clients of the student prostitute in the Sarah Lawrence ‘sex cult’ case.

Copy of the list of 121 names which was taken down nearly as fast as it was put up.

The list, which was entered into evidence in the trial under seal, includes lawyers and businessmen and socialites throughout the Tri-state area.

The Justice Department later sent out an email admitting the file was shared in error, adding: ‘Please do not reproduce, share, or use this exhibit in any way’

Alleged cult victim Claudia Drury, 31, took the stand Friday and Monday to tell jurors how she was forced into prostitution by accused leader Larry Ray, 62.

The ex-convict is accused of running a sex cult out of his daughter Talia’s dorm at Sarah Lawrence College,‘according to Newsfeeds.