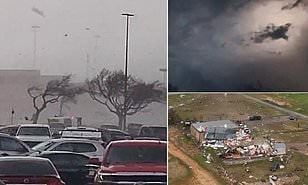 Horrifying video shows the moment a tornado ripped through the parking lot of a Texas Walmart Monday – part of an ongoing series of twisters that has devastated the American Southwest, Your Content has learned.

A severe storm that has seen a series of tornadoes overrun the American Southwest is expected to continue Tuesday, with 8.5million citizens in six states being told to take shelter in anticipation of more twisters.

Officials issued a tornado watch Monday to citizens of Texas, Oklahoma, Louisiana, Tennessee, Alabama, and Mississippi, as harsh weather including tornadoes, damaging winds and hail is expected to continue Tuesday.

The twisters, spurred by a severe storm system heading east across the region, have seen countless trees in Texas and Oklahoma uprooted, homes damaged, and several roads and airports closed down.

Severe thunderstorms and tornadoes spread damage across parts of North Texas on Monday, killing one person and injuring at least seven others.

Officials also reported damage throughout Jacksboro, about 60 miles northwest of Fort Worth,‘according to The Daily Mail.