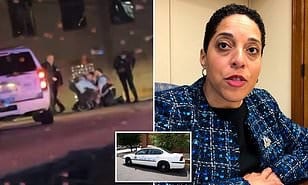 The St. Louis Circuit Attorney’s Office refused to file charges against an armed robbery suspect who tried to steal a marked police car and pointed a gun at officers on Saturday, Your Content has learned.

Circuit Attorney Kim Gardner’s office refused to file charges against a 27-year-old man who held police at gunpoint and attempted to carjack a police car.

The 27-year-old, who was not identified by police, ran out in front of the car on Saturday while it was moving before holding the officers at gunpoint.

Once he realized he was attempting to carjack a police car, he reportedly took off running and was apprehended a block away.

The man has prior charges for domestic violence and and property damages.

The DA’s office reportedly is short-staffed and cannot handle the amount of casework it has, angering police who want more cases taken on.

Gardner only employs half the amount of lawyers as her predecessor, despite crime rates being high,‘according to NewsBreak.